7 Reasons Why Sharing Our Salary Make Us Uncomfortable

Have we contributed to pay disparity by being silent about our salaries?

Like most people watching the Golden Globes this past weekend, I was fan girling Debra Messing for calling out E! about the pay disparity that lead to the resignation of one of their popular hosts Catt Sadler.

To be perfectly honest, I was a couple of weeks behind on my entertainment news fix and didn’t even realize Catt had left.

She was one of the hosts I loved so I decided to do a bit more digging to figure out what Debra Messing was referring to. I landed on Catt’s website explaining what she found out and why she left.

I can’t say I was surprised but I was deeply saddened for her. 12 years given to a company and job you love just to be presented with a choice that never should be. Take what they give you and keep doing what you love or take a stand and lose said job.

I commend her bravery for not only taking a stand (which affects her earnings and in turn her family, regardless of how much money she already has) but speaking up and out about it.

E! Entertaiment’s lackluster and frankly eye-roll inducing response (Twitter had receipts to prove the explanation didn’t hold merit because the tapes don’t lie) only make matters worse. Although to be fair, I’m not sure how else they could handle it because let’s be honest, no corporate company is going to admit “hey we do pay our male employees more than their female counterparts at the same/comparable level doing the same/comparable job for whatever reason.”

I’ve been out of corporate for 7 years this March so I haven’t really had to think about this in a while. But Catt’s story got me thinking about what I would do if I were in her position where I found out that my colleague who was doing the same job as I / was at the same level as I, and was making almost double my salary. To add insult to injury, when I tried to negotiate for same or close, I was denied.

I let the thought kind of drift away and then this morning I read about the HUGE pay disparity between Michelle Williams and Mark Wahlberg for reshoots for “All The Money In The World” (she made $1000 and he made $1.5million) and it hit me.

I started pondering all the reasons I don’t share that information and I identified 7 Reasons Why Sharing Our Salary Make Us Uncomfortable.

1. Feeling a general discomfort with talking about money. It presents itself when I have to negotiate with clients as well so clearly I have deep rooted issues regarding money that needs its own post.
2. Feeling of being braggadocios about my earning. Often what follows in my mind is “what does it matter?” I don’t want anyone to feel like I’m showing off.
3. Feeling shame for not earning enough. Those moments when I know I should / deserve more but my own fear and cowardice stood in the way of me asking/standing up for myself.
4. Feeling judged. My assumption that folks around me will say “Ooh she’s making X amount so she thinks she’s better” or “Ooh really? That’s it? I assumed she made more” or simply the introduction of comparison (see “Why Must We Always Compare?“)
5. Feeling that it is taboo to talk about money and how much I make. Society has drilled into us that we don’t talk about money. Period.
6. Feeling like my pocket will be counted. That is, it will become a constant “thing” and I’ll be expected (by family especially) to do and take care of certain things and certain people.
7. Feeling a need / sense of privacy. Simply put, it’s my personal business and some things should be kept private. 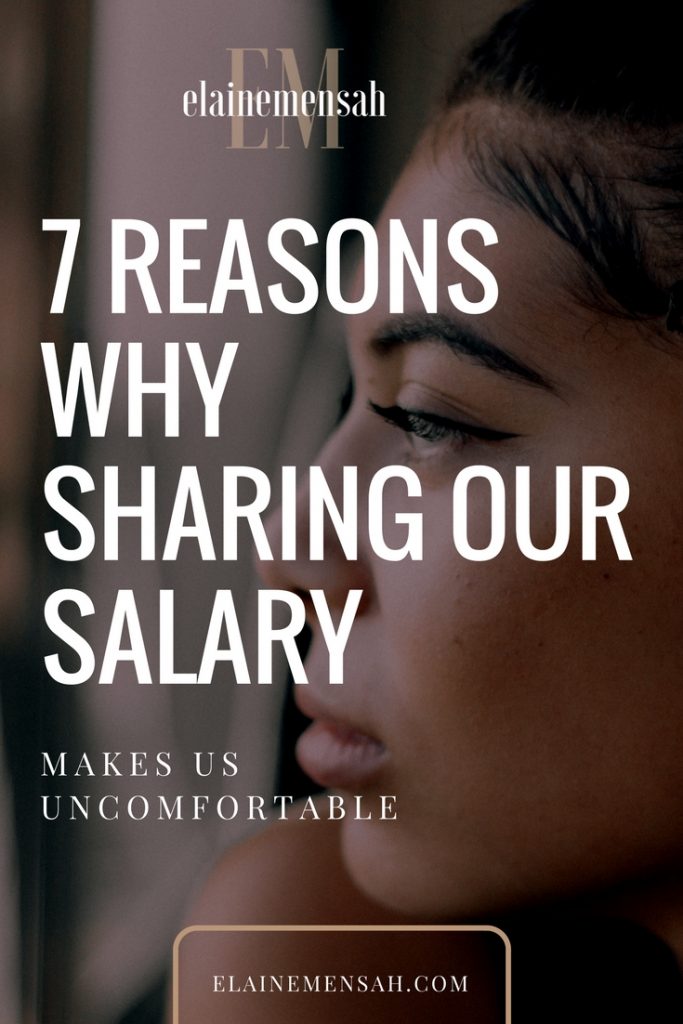 The commonalities between all of these reasons (except #7) however is insecurity and fear.

Sadly, even after writing down these reasons and looking at the words jumping at me knowing what’s really behind them, I still don’t know if I would share that information outside of my husband and the extremely few people I trust enough to tell.
I believe that’s a reality that many well-intentioned people like myself face. Who knows, maybe I am just not brave enough or confident enough BUT…
What would happen if everyone, myself included, (women and men) decided to openly share salary information?
Would companies like E! Entertainment, Hollywood producers, Silicon Valley, corporate America etc be able to get away with this practice? Would we all benefit?
I’d like to think so. Look what happens when actors band together (see Friends) and demand the same salary and are willing to walk away together otherwise?
Is this or some variation of it the answer? I don’t know.
I am a realist and know and understand that life is not that simple. People’s circumstances are different and everyone needs to make the best choice(s) for them and their family.
Someone’s situation may require them to be willing to take that lesser pay because they’ve been out of work for a year and a half, drowning in debt, and this is the first and best offer they’ve received. Are they supposed to turn it down for the greater good when their children are in need?

Or someone who gets an offer / pay raise is elated because they feel appreciated by their company, deserving of the amount given to them, and most importantly are satisfied with it. Should they suddenly be dissatisfied and turn it down because someone else got more? Does the dissatisfaction then become more about the fact that someone got more or that they genuinely believe they deserve more?
The answers are complicated and complex. How we deal with and talk about salary, income, finances are ingrained in us depending on culture, religion, socio-economic background, and simply our experiences – positive & negative – when the topic arises.
To be honest, I have no magic pill or super enlightened solution. I’d like to think sharing how much we make (anonymously or otherwise) is an option worth considering.
SO! I’d like to get YOUR perspective.
Generally speaking, i.e. you don’t have to give me specifics, would you be willing to share information about your salary with others? If no, why? If yes, what do you believe is the best avenue to do so?

Elaine Mensah is a strategist + creative experienced in the communications, fashion, tech and entrepreneurship realms. A natural at conceptualizing creative ideas and translating them into vivid realities, she has been the fuel behind the business development strategies for a global portfolio of clients. 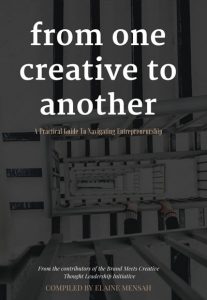